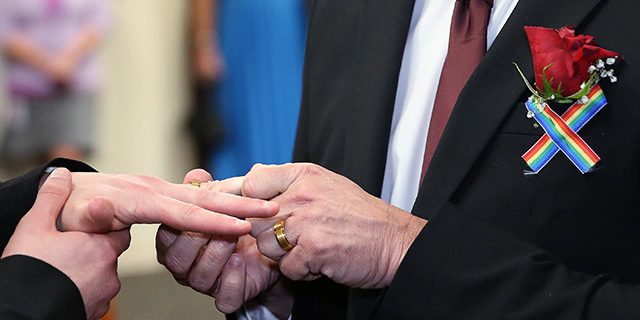 Wednesday was bittersweet for Florida supporters of marriage equality.

The Supreme Court voted 5-4 to overturn part of the Defense of Marriage Act, which had denied federal benefits to married same-sex couples. But the ruling did not address state laws that invalidate same-sex unions.

“We see this as a major step forward,” Stratton Pollitzer, deputy director of Equality Florida, said, “but we’re also aware that for the most part we’re not included in today’s victory. And more than anything, this is a call to action.”

But the Supreme Court decision means Florida’s married same-sex couples are entitled to at least some federal benefits of marriage, according to Fort Myers attorney Brian Zinn.

“This Supreme Court decision basically says that no federal law can discriminate against different types of marriages,” he said. “Which is good for same-sex married people regarding the IRS, tax laws, federal bankruptcy laws.”

Pollitzer cautioned it remains to be seen which federal benefits Florida’s same-sex married couples can enjoy. Some benefits take into account whether a couple’s home state recognizes its marriage.

“We are extremely happy,” 57-year-old Maltbie said. “We’re celebrating. We’re having a beer.”

The couple, married in Vermont in 2003, recently filed for joint bankruptcy. They were testing the system although their marriage is not recognized in Florida.

The U.S. trustees, which handles federal bankruptcy, has not given the couple a verdict. If Wednesday’s decision means Maltbie and Houston’s bankruptcy petition is accepted — as Zinn believes it does — it will save them $1,800 they would have had to pay if they filed separately.

“And that’s $1,800 we didn’t have,” Maltbie said. “We’re not getting anything extra, we’re just getting equality. Nobody wanted anything extra. We just wanted the same benefits that everybody gets.”

The Rev. James Bing, of Friendship Missionary Baptist Church in Fort Myers, said he supports marriage between a man and a woman, but has no other opinion on Wednesday’s decision.

“Because I don’t plan to marry anybody of the same sex,” he said.

But Bing said the Supreme Court lately has been issuing rulings he describes as crazy.

“If God is wrong and they’re right, then we’ve lost nothing,” he said. “But if God is right and they’re wrong, we’re headed for some very difficult times.”

The Diocese of Venice on Wednesday upheld its position that marriage is between a man and a woman, releasing a statement through spokesman Billy Atwell.

“Same-sex ‘marriage’ is part of a series of societal trends that have not contributed to stable families,” the statement read. “Others include cohabitation, contraception, and divorce, which have also eroded marriage’s meaning as a public, total, lifelong, and fruitful communion between a man and a woman.”

Pollitzer hoped until the last second that Wednesday’s decision would provide an overarching legalization of same-sex marriage. But last week, when political pundits began to say that was unlikely, Equality Florida started a movement called Get Engaged — the goal is to bring marriage equality to Florida. At Imengaged.org, visitors can find explanations of why same-sex couples want to marry, read stories about same-sex couples, donate to the cause and get tips on how to spread the message.

“Today is a call to action,” Pollitzer said, “for not just the gay community, but for everyone in Florida who supports marriage equality. Not simply to be on our side, but to speak up, stand up and be counted on the right side.”

( 2 ) The state, its agencies, and its political subdivisions may not give effect to any public act, record, or judicial proceeding of any state, territory, possession, or tribe of the United States or of any other jurisdiction, either domestic or foreign, or any other place or location respecting either a marriage or relationship not recognized under subsection (1) or a claim arising from such a marriage or relationship.

( 3 ) For purposes of interpreting any state statute or rule, the term “marriage” means only a legal union between one man and one woman as husband and wife, and the term “spouse” applies only to a member of such a union.

Marriage defined — Inasmuch as marriage is the legal union of only one man and one woman as husband and wife, no other legal union that is treated as marriage or the substantial equivalent thereof shall be valid or recognized.