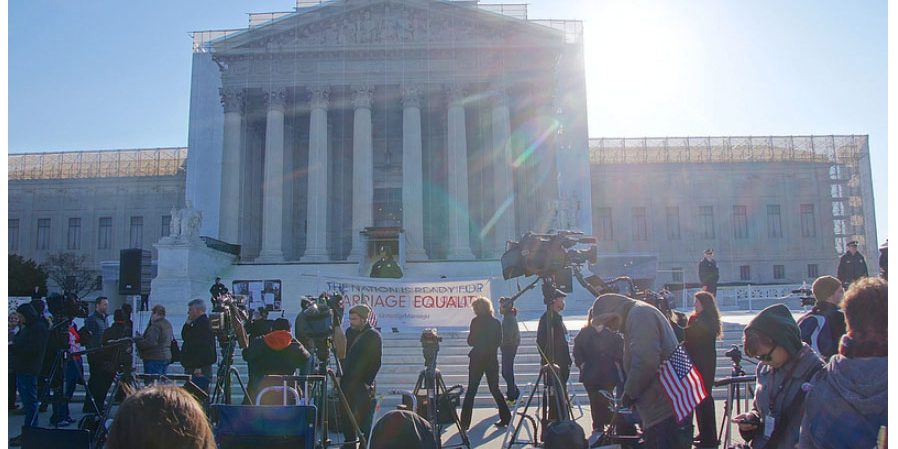 Gary Houston and Daniel Maltbie, a gay couple in Fort Myers, are ready to fight if the federal government denies their petition to file for joint bankruptcy. That’s because the Defense of Marriage Act, which is currently under review in the U.S. Supreme Court, might stand in the way of their financial plans. Houston and Maltbie have been a couple for about 30 years. They got married in Vermont a few years ago after gay marriage became legal there in 2009.

Last year, Houston and Maltbie moved to Fort Myers from Kansas and they bought a small house together close to downtown. Houston, who recently suffered a stroke, said medical bills and multiple mortgages have taken a financial toll on them.

“The bills backed us up,” he said. “We have properties in Kansas and with a mortgage here and mortgage there and taxes there, too. You know, this first year in Florida has been the most expensive move we’ve ever moved in my entire life—well, for either one of us.”

Both men are on disability, which means they have a fixed income. Right now, it’s not nearly enough and they are in debt. That’s why Houston and Maltbie are filing for bankruptcy. And like any other married couple, they want to file jointly. Maltbie said filing together makes the most financial sense.

“It is $1,800 extra if we would file separately,” Maltbie explained. “And when you are filing for bankruptcy you don’t have the money to begin with. So, that’s a big deal.”

But because Gary Houston and Daniel Maltbie are a gay couple, this option might be off the table. Their lawyer, Brian Zinn, said a federal anti-gay marriage law passed during the Clinton Administration could stand in the way.

“The big question here is: what is considered a married couple,” he asked. “Traditionally, it has been left to the state to define what a marriage is in each state. And the US Constitution says each state has to give full faith and credit to the laws of other states.”

But that changed when the Defense of Marriage Act (DOMA) was enacted. Zinn said DOMA said states can decide not to recognize a same-sex marriage from another state. The federal law also defines marriage as strictly between a man and a woman.

Zinn said in Houston and Maltbie’s case: according to Florida law, they are not married.

“Florida does not recognize the marriages of gay couples, but they did get married in Vermont, which does recognize it,” he said. “So, the Defense of Marriage act comes squarely into play here as to whether it applies in bankruptcy and whether it is constitutional.”

Brian Winfield works with Equality Florida, the biggest gay rights group in the state. He said, in Florida, gay couples face these types of issues all the time because of DOMA.

“There are about 1,139 rights and privileges and protections that married couples get from the federal level and an additional 500 at the state level that gay couples are denied every day,” Winfield explained. “And so filing for joint bankruptcy or foreclosure – which is protection from your creditors – is just one of those examples.”

Winfield said not having these rights results in real financial impacts all the time. He cites a New York Times analysis from a few years ago that found a gay couple can incur $300,000 over a lifetime in additional expenses, just because they aren’t married or their marriage is not recognized.

The fee Maltbie and Houston might have to pay if they can’t file for bankruptcy jointly is just one example.

Last year the Obama administration announced that it would not contest joint bankruptcy filings from gay couples.

However, there have been several cases where the U.S. Trustee’s Office has filed a motion to dismiss a joint filing from a gay couple. Many gay couples in other states have opposed those motions and ultimately won in court.

That’s what Maltbie and Houston said they will do if their assigned Trustee dismisses their filing. Zinn said they are ready to appeal to a federal bankruptcy judge here in Fort Myers.

Maltbie said it just makes sense. He and Houston have all the same creditors and everything they bought in the past 30 years has been bought together.

“We are just an average couple,” Maltbie said. “There’s nothing different about us. You know, we are not doing anything different. It’s just one of those things, I guess. I really wish we weren’t treated differently– doesn’t seem like we should be.”

This summer the U.S. Supreme Court will announce its ruling on whether DOMA is unconstitutional. Public opinion has been swiftly changing in favor of gay rights the past few years.

But Houston and Maltbie’s financial future right now depends upon whether DOMA is thrown out. If it is, they’ll be able to file for joint bankruptcy like other married couples.