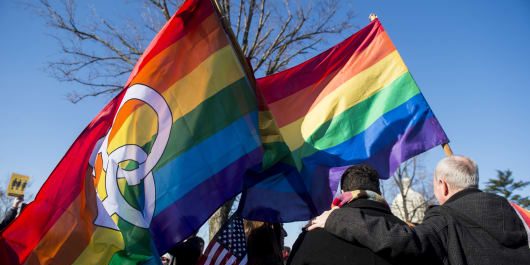 When Daniel Maltbie and Garry Houston had to walk away from their mortgage, they did what many other married couples might — filed for joint bankruptcy.

They didn’t realize that action has the potential to change lives of families across Florida and perhaps the USA.

That’s because Florida does not recognize Maltbie and Houston’s same-sex marriage, which was legalized in Vermont. Though Florida denies same-sex couples certain rights, state courts never have addressed whether they can file for joint bankruptcy.

The couple’s lawyer, Brian Zinn of ZinnLaw in this city of about 65,000 in southwest Florida, said he probably will appeal if his clients’ petition for joint bankruptcy is denied. Then the issue could move up through the court system, possibly even to the Supreme Court.

“It would put the Defense of Marriage Act issue squarely in question,” Zinn said.

If the Defense of Marriage Act were ruled unconstitutional, same-sex couples married in one state would have rights in every other. The act has been challenged many times in federal court, and the Supreme Court will issue its ruling on its constitutionality by the end of June.

Still, Zinn hopes his clients’ bankruptcy petition is approved without challenge because that would be in their best interest. The U.S. Trustees, which handle federal bankruptcy cases, likely will take two or three weeks to reach a decision.

Houston, 59, just wants the trustees to accept the petition so he and Maltbie, 57, can put their financial hardships behind them. In the 30 years they have been together, they always have owned property under both their names.

Houston doesn’t see why filing for bankruptcy should be different.

“I hope everything comes through — or at least causes people to think,” he said.

Approving the petition would be a violation of Florida law, which states non-married couples may not file a joint petition.

Yet bankruptcy lawyer Orfelia Mayor of Fort Lauderdale said same-sex married couples have filed together and quietly gone through the system with success. But she expects Maltbie and Houston will have their petition rejected and by appealing will be able to change some legal precedents surrounding same-sex marriage.

Though she has a large gay client base, Mayor never has filed a joint bankruptcy petition for a same-sex married couple. She’s always wanted to — to challenge what she views as inequality — but for reasons unrelated to politics, her clients filed separately.

Maltbie and Houston, who are about $75,000 in debt, could save about $1,800 by filing one bankruptcy petition instead of two, Zinn said. The two moved here from Kansas, where they had to walk away from their mortgage, about a year ago. Both are on disability, and Maltbie receives a pension.

“I think they are already causing changes,” Pollitzer said. “Every time one of these instances of discrimination is highlighted, it’s both an opportunity for the courts to right a wrong, but it also is what is moving public opinion so swiftly in support of marriage equality.”

“We’ve had our share of barriers that we’ve had to address in our 30 years together,” he said. “99.5 percent of the time, they’ve come out in our favor.”